A slice of Greece comes to rural Kent

The National Trust’s Sissinghurst Castle Garden in Kent has officially unveiled a Greece-inspired garden, ‘Delos’, completing a planting scheme first envisioned by Vita Sackville-West and her husband Harold Nicolson more than 85 years ago.

The 0.25 acre garden, created by National Trust staff in partnership with landscape designer Dan Pearson, was the culmination of a seven-year renewal project at the world renowned, Grade I-listed garden.

In 1935, Vita and Harold were so inspired by a visit to the Greek island of Delos that on their return they set about capturing its essence in a corner of their now world-famous garden. Taking her cue from the ancient ruins of Greece, Vita scattered stones around a former kitchen garden, using remnants from the demolished medieval mansion which once stood at Sissinghurst, and planted Mediterranean species. However, the Kent climate and north-facing position of the garden, combined with the couple’s limited knowledge of Mediterranean planting, meant that the garden never really became all they hoped for.

Although the reimagined Delos garden looks very different to the rest of Sissinghurst, best known for colourful and abundant planting in ‘rooms’ including the rose garden and white garden, it is entirely in keeping with Vita and Harold’s spirit of experimentation. 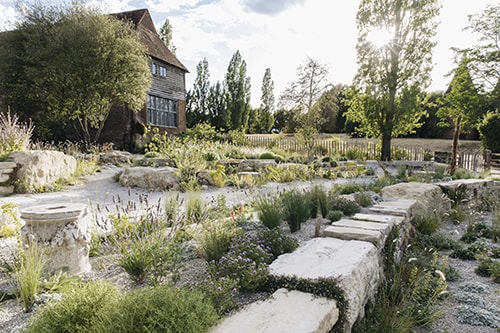 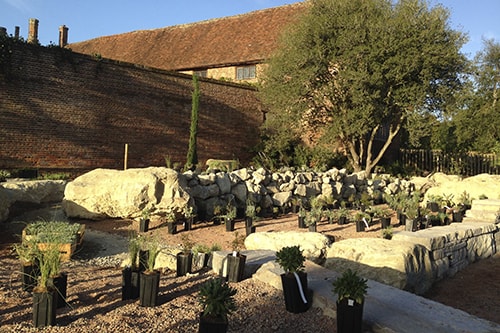 Working with Dan Pearson, and drawing on archives and a research visit to Delos, the Sissinghurst team used current design practices, clever landscaping techniques and a broader spectrum of planting to create a more robust garden, while still maintaining the spirit of Vita’s ambition.

Innovative landscaping techniques have been used to overcome the challenges of the site, such as north-facing shade, heavy clay soil and poor drainage. These solutions include angling beds to harvest maximum sunlight, creating drainage systems and using some 300 tonnes of crushed local ragstone to avoid excess winter wet.

Tilted, low stone terraces were built to alter the topography of the site so that the beds follow the passage of the sun, maximising light. These evoke the terraces that Vita saw and admired on Delos, and also create more varied planting opportunities. At the heart of the design is a central ‘street’ and agora (square), dotted with antiquities including marble altars and troughs, whose formal style reflects the urban areas of Delos island.

The planting, too, is innovative. With predictions of hotter, drier summers and wetter, warmer winters, the new Delos garden sets an example of how we might be gardening in future by using plants which are naturally adapted to extreme conditions. More than 6,000 perennials typical of Greece and the wider Mediterranean basin have been introduced, while pomegranate, cork oak and cypress trees punctuate the garden and provide shade.

Visitors can look forward to seeing the garden change and develop as plants spread, seeding themselves into crevices between rocks and creating a natural feel as they colonise their environment.

Fancy a break away including a visit to Sissinghurst Castle Garden?
Click here for more information on the National Trust's Sissinghurst
For a campsite close to the garden, take a look at Tanner Farm Park, part of the Premier Parks group and just 20 minutes away from Sissinghurst.