An 25-pitch, adult-only site, ideal for exploring the Gower peninsula and Brecon Beacons of Wales

Miriam, Glan and son, Hywel moved to Llwynifan Farm on the 14th of June 1976 from a new modern house (a house with all the 'modern' luxuries such as gas central heating!) to Llwynifan Farm, which needed a lot of work to modernise. Glan also had a job, and worked as an ambulance man, so the work he did was during holidays and weekends.

In 1985 it was decided that part of the farmland would be a CL with The Caravan Club (now known as The Caravan & Motorhome Club), and so the park was opened. The initial thought was that guests would use the site as a stop over on the way to Ireland or Pembrokeshire, but it ended up that guests came for much longer, and used the park as a base to tour round south west Wales.

The standard pitches on the current Llwynifan Farm are the original five-van site. Over the years the park has been developed. Electric hook-ups were becoming popular, and so these were added on. One of the images above is the grand turning on ceremony of these hook-ups, with Hywel and his sister Cathrin's grandmother and grandfather having the pleasure of the first switch on, to one of their regular guests. The seasonal pitches were added, along with a basic toilet block and shower facilities.

Miriam and Glan worked hard in developing the farm to what it is today. Glan passed away in 2012 and Hywel and Cathrin took over. The following year they added 10 fully serviced pitches and upgraded the toilet block, to include under floor heating, hand towels, and LED lighting throughout.

They constantly aim to improve their small park, with an electric car charging point being added in 2021 and a dog shower (with hot water) also being added.

A small 25 pitch, adult-only touring park. Llwynifan Farm is situated in Llangennech near Llanelli and centrally located to visit any attraction in south and west Wales. All pitches are hardstanding, and all have a view. There are spacious heated shower rooms, toilets, dish washing facilities and laundry facilities. The park also has 10 serviced pitches. The standard and seasonal pitches remain open all year. 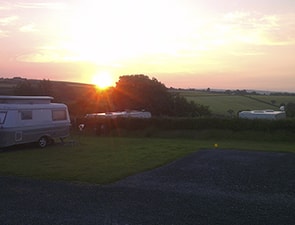